This is Leo on the day that I discovered him in the cow pasture.

While driving home from work one summer evening, I saw this poor horse standing at the fence line. I pulled over onto the right-of-way and took some pictures so I would have something to show the law if the horse wasn’t there later. After I took the pictures, I called the sheriff’s department to report the horse.  Within a couple of hours a deputy called me back and said he’d contacted the owner of the property. I was told that if the sanctuary wanted to take the horse, I could come and get him.

Here is the story I was told by the owner of the horse. When Leo (I named him Leo) became old and ill, the owner didn’t want to put him down herself, so she asked a friend to do it for her.  The friend took Leo and put him in a cow pasture next to a creek with a bunch of cows and several other horses. She figured if he was able to get around and eat he’d be fine, so he was left to fend for himself while she waited to see what would happen…

As soon as I could I made an appointment for our vet to go to the cow pasture to check him out and pull blood for a Coggins test. (The law requires that all horses be tested for Equine Infectious Anemia.) The vet guessed that Leo was at least 30 years old, and it was obvious that he was underweight. Thankfully, the owner of the property allowed us to feed him 3 times a day and doctor his wounds while we waited for the test to come back.

It was a huge relief when we were finally able to get him to the safety of the sanctuary. He quickly settled in. I put him in the house yard because he was too compromised to go out with other horses.  Since he was right up front and center, he got a lot of attention from our volunteers.

The gallery was not found!

Initially, we fed him 5 small meals a day.  As you can see by the pictures, he began to put on weight and was really starting to look good. He was thriving as a result of all the attention and good nutrition. 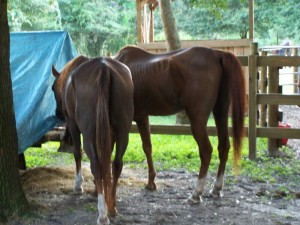 In August, I took in a 34-year-old Quarter Horse mare named Royal, and the two of them bonded almost immediately. They were inseparable!

Unfortunately, in September, Leo developed an abscess in his right foot, which set him back a bit, but he pulled through and continued to do well. Then he developed an abscess in his left hind foot. I was out of town for several weeks and Dutch and Pat soaked and wrapped his foot tirelessly.  It was almost impossible to get his feet trimmed because he was in such pain.

The left hind abscess blew out at his heel bulb, but he didn’t show any relief from the pain; then the coronet at the front started to swell as if it was another abscess. We did everything we could to treat it, but it just got bigger and bigger and never drained like a typical abscess.  Under the assumption that it was an abscess, our vet told us to keep soaking it and apply ichthammol dressing to try to draw it out. It was very painful for Leo. He couldn’t walk at all for over two weeks.  Since his condition wasn’t improving, and I couldn’t stand seeing him in pain any longer, I called the vet again to see if he could do anything to help him!

It turns out that it wasn’t an abscess; it was pythiosis. The vet opened and debrided the wound as best he could. It seemed to give Leo some relief from the pain and by the next day he was scooting around the yard a bit. We were all very hopeful.

Pythiosis is known by many names, including pythiosis, phycomycosis, Florida leeches, Gulf Coast fungus, and swamp cancer. The disease caused by Pythium insidiosum is bad news. Lesions on the limbs are characterized by the formation of tumor-like masses with fistules and serosanguineous discharge. Pythiosis is caused by the aquatic fungus, Pythium insidiosum, and is common in the tropical to subtropical areas of the Gulf Coast region of the United States, South America, and Australia. It normally infects aquatic vegetation and organic debris. (HorseAdvice.com)

Look at his eyes. This is the reality of the abuse and neglect that happen all too often. Do your horse, dog, cat, or other pet a favor. Don’t dump him or her on someone else who might not (and probably doesn’t) have the love that you have for your animal. It’s a gift we can give our non-human family members.  Be there with them and help them until the end!

On Christmas Day, I found Leo lying down, with Royal standing nearby. He had been walking around the day before and I had such high hopes that he would regain his strength and be able to fight it, but now he was in such pain that he couldn’t even lie up on his sternum. When I looked at the bottom of his feet, he had blood draining out of several abscesses. I put the towel under his head so he didn’t get dirt in his eye or mouth, and I used a bale of hay to prop him up to drink. 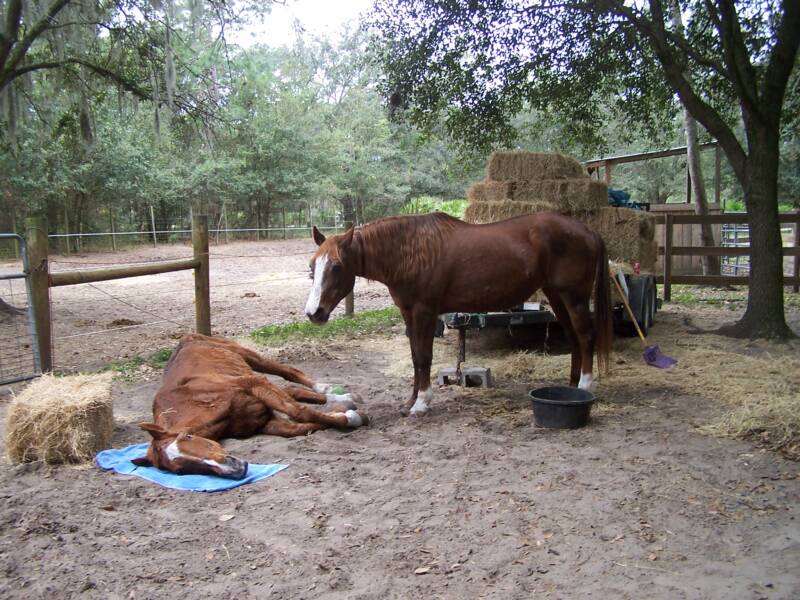 It was time to make the decision I had been dreading.