This is Willow the morning after she arrived at SHHS.  She was found in a cow pen, hock deep in mud, with a terrible wound on her leg.  When I got there she was down and nearly unresponsive.  After a dose of Banamine, a quick call to our vet, and then a call to her owner (who was out of town), within 20 minutes she was up and ready to travel to the sanctuary. 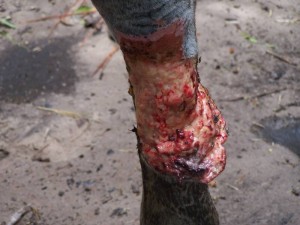 The wound appeared to have been caused by a wire fence.  She probably kicked at another horse through the fence and when she brought it back through, it “degloved” the skin from her leg.   Someone had tried to wrap it, but the wrap had slipped down over her fetlock and was pretty much useless. The skin flap should have been removed. There was no way it was going to grow back to the leg! 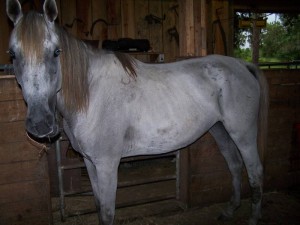 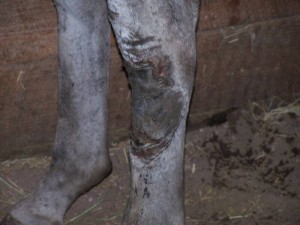 Here she is a week later. Our vet came out to remove the flap of skin from the bottom and cauterize the wound. (She was put under general anesthesia for this procedure.) My job was to wrap the leg every two to three days and spray it with a special solution. I wrapped her leg religiously for 6 weeks. At that point, she was finally able to join a herd. 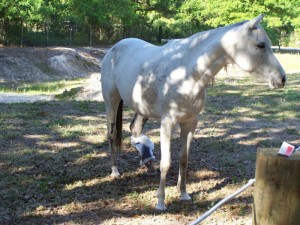 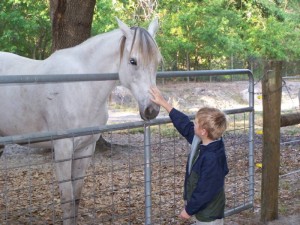 Six months later, she kicked at another horse through a wooden fence. She re-injured the left rear leg and caused some superficial wounds on her right rear leg, as you can see by the picture above. I was back to wrapping her leg for another 6 weeks!! 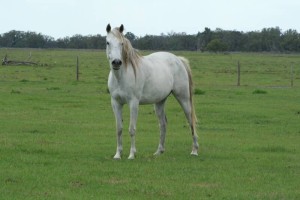 This is Willow now. You can see next to the end of her tail that there is still a scar on her left hind leg, but she has no issues with the leg and hasn’t stuck it through any fences lately!  In the last few years, we’ve trained Willow to become our natural horsemanship demonstration horse.  She’s beautiful, smart and popular with everyone who meets her.