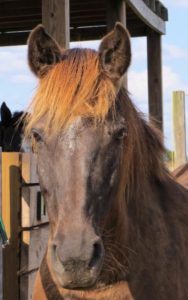 Please help us save Echo…
for the third time!

As many of you know, Sixteen Hands saves horses who are about to be killed or euthanized because they aren’t perfect.  Because they can’t be ridden…or they need medical attention…or they’re so frightened they can’t be touched.  We save horses who end up, through no fault of their own, in the hands of people who can’t or won’t care for them.

Echo is a horse who is so fearful we can’t touch her.  She’s a beautiful but wild mustang mare who’s been saved twice by Sixteen Hands, but we can’t take care of her as well as we should.  Gaining her trust is critical, and we need an expert to help us do that.

By participating in our December matching challenge, you can make a difference in Echo’s life.  Two generous donors have promised to contribute matching funds for donations made between now and December 31st.  That means your donation will be matched, dollar for dollar, so Sixteen Hands will receive twice as much.

Here is Echo’s story.  Here is why we need your help.

Echo was one of a number of horses abandoned by their owner and picked up by Highlands County Animal Control.  At the time, Sixteen Hands wasn’t in a position to give her a lifetime home.  But in order to save her from being euthanized, we agreed to house her temporarily until a permanent home could be found.  Another rescue took her in early 2011.

The other rescue fed her well but was unable to lessen her fear of humans.  In late 2016, she was given to an adopter who claimed she could increase Echo’s level of trust.  Unfortunately, that didn’t happen.  Not only did Echo remain in a feral state, but her physical condition deteriorated and she became very thin.  At that point the other rescue couldn’t take her back, so we saved her a second time.

Third and final “save” – to be accomplished with your help!

Echo deserves the same quality care we give to our other horses.  Over the last eleven months she has gained weight.

We’d like to bring a Parelli Natural Horsemanship specialist to the sanctuary to help us transform Echo into a trusting horse.  This is an expensive, but extremely important, project.

We look forward to keeping you informed of Echo’s progress.

P.S. Remember…in order to be matched, your donation must be sent or submitted no later than December 31st.